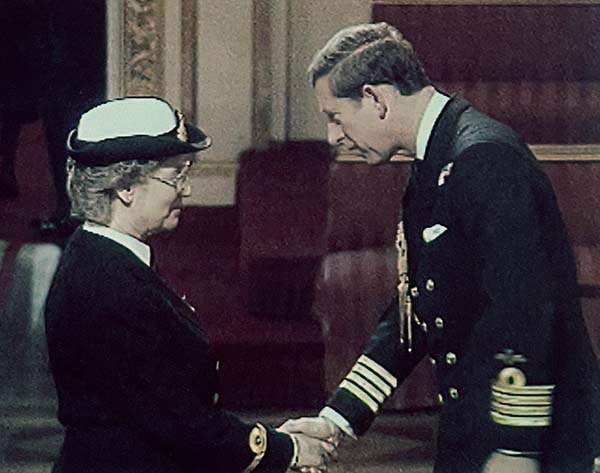 Stella Frances Rand MBE passed away peacefully on 26 October 2021, aged 92. She will be much missed by family, friends and former colleagues, including in the RAF Association, the Royal British Legion, the much-missed Royal Naval Auxiliary Service and the Royal Canadian Air Force.

Stella was born on 15 March 1929 to Alice and William Rand of North Road, Great Clacton. She was evacuated in the war to Gloucestershire with younger brother Cyril (1934-2012) and on leaving school in July 1945 worked as a clerk and shorthand typist at a local solicitors. At the age of 24, Stella joined the Women's Royal Air Force and put her commercial experience to work, as a stenographer to two senior officers. After two years, she was posted to Germany as a Corporal employed on general clerical duties.

In 1957, Stella left the WRAF to work as a stenographer for a produce broker in London. However, her wanderlust had taken hold, and she applied to join the Royal Canadian Air Force. Aged 29, she joined as an airwoman and was initially stationed at RCAF Downsview, Ontario. She received her commission in April 1961, and was stationed at RCAF Foymount, Ontario and RCAF Greenwood, Nova Scotia, latterly as Personnel Administration Officer for 404 Squadron, one of the force's first two female Adjutants of an operational flying squadron. She was also involved in the Girl Guides movement when in Canada, just as she was in the UK.

By the mid-1960s, Stella wanted to see even more of the world, and left the RCAF, moving to the west coast of Canada, to Victoria, BC. However, there was more travelling to come; in a CV from the time, Stella expressed a wish "to work in a part of the world where I can escape the worst of the winter". This wish would take her to Auckland, New Zealand, where she worked as a Senior Secretary at a firm of solicitors, who correspondence shows were genuinely sad when she finally moved on again, this time to return to England in 1971.

Back once more in Clacton-on-Sea, for the rest of her career she worked for Essex County Council in an administrative role in social services.

Stella once wrote, about returning from her travels: "Having been away for so long I had no particular friends and was missing the companionship I had found in the services. The work at Social Services was stressful and I needed to do something which was relaxing and useful. I had considered the Royal Observer Corps but that was in Colchester, and the nearest RAF Auxiliary Unit was in London, so when I saw a recruitment advert for the Royal Naval Auxiliary Service (RNXS) in Clacton I had to go and find out more. They made me very welcome and didn't hold my air force service against me!"

The RNXS was the uniformed, unarmed, civilian volunteer service administered and trained by the Royal Navy to operate in the ports and anchorages of the UK in an emergency. Stella was quickly promoted to lead the 50-strong unit, mainly men, and continued as a member until her retirement, aged 65. She was as heartbroken as anyone when at the same time the volunteer-run service was disbanded as part of Ministry of Defence cuts.

After retiring, she became a governor of St Osyth Road Infants School. She also moved back into the family home at Coppins Road, Clacton, to care for her mother, who died in 1994, aged 93.

In 1990, Stella represented the British Legion at the Royal Albert Hall Festival of Remembrance. She was invited to a Buckingham Palace Garden Party in 1993, and the following year, in recognition of her public service, Stella was awarded the MBE. She received the honour in naval uniform from Prince Charles at Buckingham Palace, and rightly regarded it as perhaps the proudest moment of her life.

In her later years, Stella was also an active member of the Royal Air Forces Association as well as the Royal British Legion, who have both sent their condolences to all of her family, friends and former colleagues. An independent woman all her life and to the end, she will be much missed by many people around the world.

Stella's funeral took place at Weeley Crematorium on Monday 29 November 2021. The funeral was broadcast online and a recording will be available within 48 hours. Instructions on how to watch are below.

At Stella's request, any donations in memoriam should be made to the RNLI, Clacton-on-Sea Lifeboat Station.